I was monitoring the mail logs on a Postfix server and noted repeated failed connection attempts from the same IP address. The source was likely up to no good, and it was making it more difficult to monitor the logs for legitimate connections, so I decided to block it:

How is that possible? First I checked iptables to check my sanity and confirm that the rule had been added:

The problem in this case was a different rule that had been added previously. Rules in iptables are processed in order, and no further rules are processed after a matching rule is found. Well above my newly-added rule was this rule:
ACCEPT tcp -- anywhere anywhere state NEW tcp dpt:smtp

That rule makes sense for a mail server, but I needed my rule to be inserted before it. I determined which rule it was in the INPUT chain like this:
iptables --line-numbers -L INPUT

After that, the offending IP address stopped creating entries in the mail.log.

However, my new rule would disappear after a system restart. Since I am using iptables-persistent, I saved the rules to the config file:
iptables-save > /etc/iptables/rules.v4

I checked the rules again and my new rule was there, above the rule allowing connections from any IP on port 25. However, I also noticed the following rule above either of those:
ACCEPT all -- anywhere anywhere

I freaked out. That rule indicates that all traffic from any source on any port should be accepted. That’s the worst firewall rule I’ve ever seen. It basically negates the entire concept of a firewall. It clearly should not be there!

However, using the verbose switch on iptables:
iptables -vL INPUT

I discovered that the rule only applied to the lo interface (loopback). That’s a relief–that rule gets to stay.

I received an invitation to a survey today. I was selected as an alumnus of the University of Michigan, an enormous university. The e-mail implies that the survey is possibly on behalf of the university. It includes the well-recognized “Block M” logo.

It all looks pretty fishy/phishy.

Nowhere are there any links to umich.edu.

But I will not be filling out such a survey. You shouldn’t either. And, if you’re in the business of creating surveys or hiring companies to create surveys, you should think about these factors. Why create something that looks this suspicious?

I’ve always said that survey results automatically exclude those who don’t have time to waste on surveys (this one suggested it would take 18 minutes to complete!), but now it seems they also exclude anyone with a mind for security and privacy.

ColdFusion introduced SessionRotate in CF10 to mitigate such attacks. However, it only applies to CFID and CFTOKEN (ColdFusion sessions). If you are using J2EE sessions, there is no SessionRotate. This is unfortunate, as the ColdFusion documentation has stated for years that J2EE sessions have advantages over ColdFusion sessions (see Configuring and using session variables), the foremost being that J2EE sessions are not persistent. It’s also unfortunate, because this is an important security-related tag that only works under certain server configurations–and fails silently under others!

As a side note, J2EE has been called JEE (Java Enterprise Edition) since Java 1.4. The ColdFusion administrator continues to refer to it as J2EE, but you are likely to see references to JEE in reference material online.

Jason Dean at 12robots.com wrote about mitigating session fixation on ColdFusion in Session token rotation REVISITED and other articles. His posts were helpful in explaining the issue and offering a solution for rotating ColdFusion sessions on pre-CF10 systems. However, he posted no solution for JEE sessions.

But according to the CF documentation on Ending a session: You cannot destroy the session and create a session on the same request, as creating a new session involves sending session cookies back.

That’s problematic. Once a user authenticates, we can destroy the user’s session. But how do we create the new, authenticated session?

An answer posted in response to ColdFusion Session Fixation on StackOverflow suggests the solution is to store necessary data in a secure way and pass the data, or a token associated with that data, on to a new HTTP request. I considered, for example, generating a UUID as a nonce and storing it in a database along with the username and a near-future timestamp. The user would then be directed to a URL with the nonce appended as a token, which could be validated against the database to authenticate the user.

The final step is somewhat more complicated, as the new session is apparently not immediately available, and copying the attributes happens in the Application.cfc’s OnSessionStart. Still, it can happen in a single request! The JEE documentation on Creating and Managing User Sessions has more information about the underlying JEE sessions.

When I implemented Pete Freitag’s solution, I made the following modifications:

I can modify the cfcomponent tag in the Application.cfc of any app to include:
extends="jeeSecureApp"

Note to the web development world: even a mainstream media source like Time Magazine knows about SQL injection. Don’t you think it’s time you protected your web applications against it? 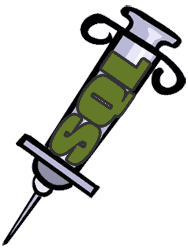 SQL injection is a subclass of injection attacks, wherein a malicious user manipulates input so as to insert (or inject) a tag-along command into the application code. It’s #1 on OWASP’s Top Ten Vulnerabilities for 2010, in part because such vulnerabilities are:

Because it is so common and easy-to-exploit, there are a lot of automated tools that malicious users (often by way of compromised machines) use to scan sites and test them for vulnerabilities. If a vulnerability is found, the application may be targeted for further attacks. Basically, attackers are on the lookout for low-hanging fruit in the same way that thieves look for valuables sitting in plain sight in a parked car. Don’t take the car analogy too far, though: if someone breaks into your car, there will be broken glass and your iPod will be gone. If someone exploits a SQL injection vulnerability on your site, they may have all your user data (and more), with hardly a trace: entries in your access logs and error logs, which are too-often completely ignored.

SQL injection is fairly simple to defend against using parameterized input, and your development language of choice should have documentation on how to do this. OWASP also offers a SQL Injection Prevention Cheat Sheet. There are also automated tools to you can use to check your code for SQL injection flaws (such as QueryParam Scanner for ColdFusion), or test your site for vulnerabilities–also known as penetration testing or pen testing–such as the (currently out-of-date) SQL Inject Me add-on for Firefox.

Checking your web applications for SQL injection vulnerabilities is the first thing you should do, but it is hardly the last. Although fending off automated SQL injection attempts is definitely a good thing, there are many other categories of vulnerabilities, and a determined attacker will find them. Stay informed, and make sure you know what attackers are up to before you read about it in Time.

Aside from the fact that I doubt that their updates on these various services will enrich my life, there is another very good reason not to follow them:

It’s easy to trace your connections online. Most of this information, for most users, is public. If you follow Bank A, it stands to reason that you have an account at Bank A–something a malicious person would not have known before. Even if your online persona isn’t directly connected to your name, you might be surprised at how easy it is to connect the two with a Google search.

(That last item says a lot, I think.)

Any bank that suggests you follow them on social media must be pretty confident of their security! Or, more likely, their marketing teams and their security teams don’t talk to each other.

You wouldn’t stand on a street-corner handing out cards that say, “My name is Bob Billiards and I have an account at Bank A” would you? Then don’t follow your bank on a social media site.

I attended the WordCamp Birmingham conference this past weekend to find out more about all things WordPress. WordPress is an open source blog engine/lightweight Content Management System (CMS) that has a huge community of users and developers, and an enormous repository of plugins to extend its functionality.

One of the presentations I attended, Mitch Canter‘s session on WordPress Security, had 6 good tips for making your WordPress-based site more secure:
END_OF_DOCUMENT_TOKEN_TO_BE_REPLACED

However, it is fairly trivial to modify your referer header, so anyone who wants to monkey around with sampleapp/edit.cfm can make it look like they are coming from sampleapp/index.cfm. (If you’re interested in modifying your HTTP headers, I suggest checking out the Tamper Data Firefox plugin.) The check provides absolutely no assurance that the user is really coming from the page. Therefore, I decided the check was useless.

I’ve been attending a weekly web application security study group with some of my colleagues for the past several weeks, where we’ve been reading and discussing The Web Application Hacker’s Handbook. The past couple sessions have been about cross-site scripting (XSS). Justin Klein Keane brought up a good point at today’s session: checking the referer may not keep a malicious user from altering his or her referer string, but could help identify victims of XSS attacks who were possibly directed to submit malicious data from a third-party site.

Checking the referer isn’t a sufficient protection against malicious users, by any means, but it could still be helpful. What do you think?