I just installed Node.js on a new system and wanted to make sure it worked. I tested it with a simple hello world script.

Then I attempted to run it:
C:\>node node.js

Turns out, Windows is trying to run the Javascript, node.js, not via Node.js but natively in Windows.

If I rename the file hellonode.js I can reproduce the same error:
C:\>hellonode

Or I can run the intended file via Node.js:
C:\>node hellonode.js
Hello node

I did not realize that the Windows command prompt could/would execute Javascript files natively.

At first I tried calling getResponseHeader as a method of the data object:

But data contained just the response body, and data.getResponseHeader was null.

A closer look at the jQuery documentation indicated that additional objects are passed to the done function, including the jqXHR object. Accessing that object’s getResponseHeader method worked:

It is fairly common to want to take an HTML source of variable length and display an excerpt. Although some formats, such as Atom and RSS, anticipate this and create a separate summary element, we don’t always have the luxury of using such a data source.

Creating an excerpt introduces a problem, though: if we create an excerpt based on a number of words or characters, we may end up with unbalanced HTML or even broken tags.

One solution is to discard all tags and display plain text, but this is often unsatisfactory.

Here is my method of balancing tags. It assumes that the input is an excerpt of a valid XHTML snippet. The reason for this requirement has to do with self-closing tags, which I hope will be apparent from the description:
END_OF_DOCUMENT_TOKEN_TO_BE_REPLACED

Recently a colleague and I were looking at some Javascript code that randomizes a list of elements. The code did this by creating an array of list-item elements, and then passing a comparison function that returns a random result to the array.sort() method. Unfortunately, the random order was anything but random: after reloading the page 50 times, the distribution was skewed heavily towards the original array ordering.

In case you don’t feel like reading my entire exploration of this topic, I’ll give you the short version:
Don’t use array.sort() to randomize arrays! There are methods of randomizing arrays that produce better (i.e. more random) results, and that are (probably) faster.
END_OF_DOCUMENT_TOKEN_TO_BE_REPLACED

To celebrate one of the last days of National Poetry Month as well as The Accidental Developer’s 100th blog post, I will attempt to combine a bit of computer science and poetry.

I’ve been studying grammars and formal languages, among other things, this past semester in my Theory of Computation class. One thing that it reminded me of was the second Javascript application I ever developed (with the help of my friend and college classmate Miranda Tarrow): The Random Goth Lyric Generator.

I took a simple sentence structure (subject, verb, adjective, object) and made random substitutions for each line, 4 lines per stanza, 4 stanzas per poem.

The word list was meant to be dark and foreboding but was often hilarious–the examples included:

I don’t know why the list of objects was a separate list of nouns, as it seems to me now that it could have pulled from the same list. Since the grammar used just one sentence structure, the results were very repetitive but frequently humorous. I often considered expanding the possible sentence structure (something as simple as making the adjective optional), but decided that the repetition was part of the charm. In fact, many poems and song lyrics feature repetition, and the results seemed eerily intentional at times.

The page was very popular for a time. I received quite a bit of e-mail regarding the page, including suggestions for additional words. Someone sent a song they’d recorded for which they used the random lyrics (with the addition of a shouted, “There’s that m———— word again!” in the middle). At least one randomly-generated poem was published in a small poetry journal.

no one spilled
with

while the urgent
petals

It just doesn’t seem quite as funny or compelling. I can venture a guess that William’s sparse form and carefully selected language doesn’t lend itself to random imitation as well as verbose and self-indulgent free verse. Although perhaps the sample is merely too small!

On 13 January, 2012, I saw Javascript expert Douglas Crockford deliver a talk titled “Programming Style and Your Brain” on the campus of the University of Pennsylvania. The brain portion of the talk (which Mr Crockford said borrowed heavily from Daniel Kahneman’s book Thinking, Fast and Slow

) was really just to emphasize that human beings have 2 distinct ways of thinking: Head (slow) and Gut (fast). Computer programming requires some of both, but the same Gut-thinking that can provide useful insights can sometimes also lead us astray.

For example, programmers have been arguing since the 1970s about the placement of curly braces. Some people prefer:

Crockford says that if the compiler treats these 2 forms as equivalent, then there is really no difference (so long as you are consistent). These are Gut decisions. However, people will use their Head to try to rationalize their Gut decisions and come up with some ridiculous rationalizations.

OK, fine. What does that mean in practical terms, i.e. writing code?
END_OF_DOCUMENT_TOKEN_TO_BE_REPLACED

Web developers often use the attribute target="_blank" to force a link to open in a new window. However, if you use an HTML validation service to check your web pages, you know that the target attribute is not valid in strict versions of HTML and XHTML.

There is a simple way to have a link open in a new window using Javascript. You may have seen code like this:
<a href="#" onclick="window.open('http://osric.net')">osric.net web hosting</a>

That method has some serious drawbacks, though:

I’ve written a summary of the issue and the methods I’ve found so far that best address it. I moved it to a page outside this blog because of the Javascript examples, which were easier to include on a separate page: 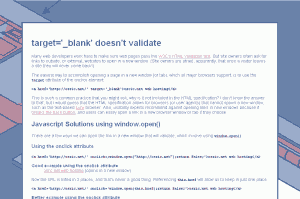 A few years ago, I ran across this quote:
“There are more people alive today than have ever died.”

As we contemplate overpopulation, a quote like that is quite thought-provoking and shocking. Could it be that the living today outnumber all of our ancestors? It’s astounding. However, I didn’t believe it. I still don’t believe it, and for good reason.
END_OF_DOCUMENT_TOKEN_TO_BE_REPLACED

I was recently trying to get a Sencha Touch demo up-and-running, but my callback functions after requests for JSON data never ran, and Firefox would throw errors along the lines of “invalid label.” I didn’t understand why–until I read more about JSONP.

JSONP prefixes your JSON response with a function name, which runs when the response is retrieved. It’s a way of handling the data without a listener.

This means that your JSONP provider needs to detect a JSONP parameter, and then wrap or “pad” the response within the specified parameter value.

For Sencha Touch, the JSON returned should be wrapped in Ext.util.JSONP.callback();. If your JSON looks like this:

Not that you should hard-code that function name anywhere in your JSON output–web-based APIs and services should pick up the function from your request and wrap the JSON for you. For example, the twitter search API accepts a callback querystring parameter.

would wrap the JSON response inside

I ignored the extra letter in the acronym at my own peril–I figured it was just a trivial variation on JSON (which it is) that wouldn’t make any difference in how it was handled (but it does).

Can you access a URL querystring with Javascript?
Yes. Just refer to location.search.

Why would you want to reference the URL querystring with Javascript?
A couple reasons come to mind. END_OF_DOCUMENT_TOKEN_TO_BE_REPLACED